BENNETT-KURODA is the duo of Samm Bennett (3-string guitar & vocal) and Daisuke Kuroda (guitar). The two musicians came together to form the band in the summer of 2018, and from the beginning shared a strong musical dialog and a common sense of how to frame a song, how to bring it to life. Daisuke's harmonically rich, deft and solid guitar work is the perfect counterpart to Samm's spare, basic 3-string accompaniment, adding a new dimension of depth and tonal color to his original songs. As a highly skilled player, Daisuke has an innate sense of when and how to add harmonic embellishment to Samm's stripped-down accompaniment, but also, just as important, has that all-too-rare ability to keep things simple when they need to be simple! So the two guitars maintain a tight balance of rhythmic and harmonic flow, with Samm's sinuous vocals interweaving. And at the most basic root of it all, there's the rock solid thump and steady timekeeping of Samm's stompbox, grounding the music in a deep and infectious rhythmic pocket unexpected in an acoustic duo.

In the space of a few short months they have managed to squeeze in a great number of live shows, and their repertoire has rapidly expanded to include at least 40 of Samm's tunes (and counting) as well as a number of favorite cover versions.

Echoes of the blues, folk and country music traditions reverberate throughout their collaborations, with elements of rock, R&B and soul working their way into the mix as well. Lyrically, Samm's tunes cover a wide range: many are story songs, rich with characters and situations. Others are often humorous, or, by contrast, explorations of certain darker elements of humanity, and sometimes both rolled into one! Still others are historical vignettes, full of images and people from earlier times. Many are autobiographical to one extent or another, or are informed by dreams and dreamlike occurences.
A lot of them involve trains, whisky, or both! Love and loss, wandering, crime, punishment, the longing for freedom and redemption... a gamut of human emotions and states of being are explored in Samm's evocative lyrics.

Many listeners comment on his vocal and melodic expressiveness, in which liberal use of falsetto voice plays a major part. His tendency to vary his vocal interpretations from performance to performance has also been noted by listeners, and his approach to the same song, from one night to another, often depends on purely spontaneous decisions based on mood and a desire to explore anew, rather than continually delivering his songs in the same fashion or adhering strictly to preset contours. Spontaneity is a key element in Bennett-Kuroda performances, keeping things fresh and exciting for the band members and audience alike. 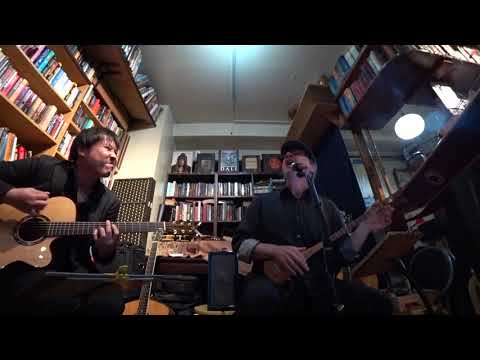